The Ecology and Biogeochemistry Core Lab, located on the garden level of the UW Biodiversity Institute, is buzzing with opportunity and equipment for students across campus and beyond.  Jessica Kern, introduced in our last post, has been a key facilitator in the growth and development of the Ecology BGC lab in the last year.  She has aided in bringing new, EPSCoR funded equipment to the table in addition to expanding the lab's outreach.  To get a better feel for what lies between the lab's four walls, let's take a tour.


While there are hundreds of thousands of dollars implemented into the Ecology BGC Lab's most used equipment, a few pieces of technology stand out.  These three machines are pertinent to the lab's functionality and are widely used by students and staff.  Let's dive a little deeper into what they are and what they do. 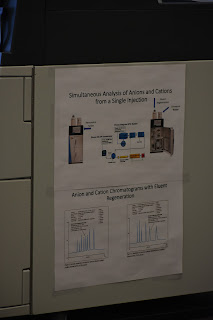 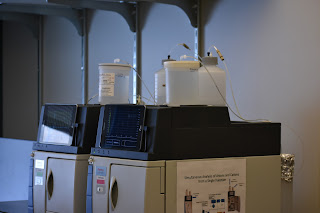 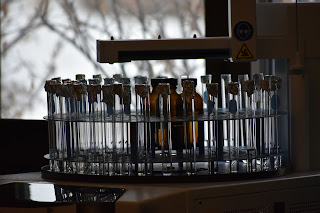 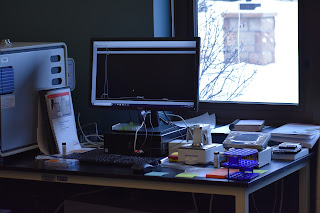 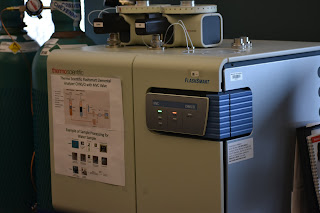 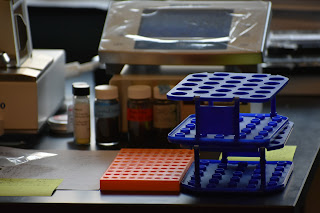 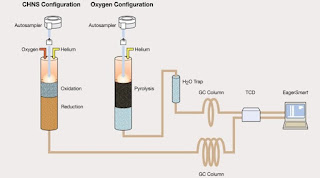 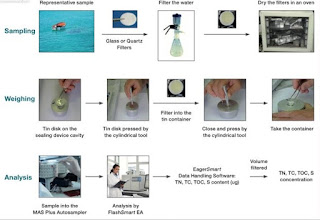 Aside from the large, specialized equipment in the lab,there are smaller, more portable equipment tools in the Ecology BGC lab that is shared among multiple users for temporary use.  Typically, students or researchers can check out equipment for two months or less.  Anyone looking to check out equipment must follow set labeling, scheduling, and clean up requirements.  Jessica Kern is in charge of this process and will aid in getting students and community driven researchers what they need for their project.  A list of available equipment can be found on the lab's website.

For students and researchers interested in checking out equipment, the field kits available in the lab may be on their list of necessities.  These kits allow for ease of sample collection and evaluation in the field or during outreach activities.  The field kits can be checked out for various time intervals, depending on the project and include meters such as the YSI (water analysis), Hydrosense II (soil analysis), and the Oakton 5 in 1 (soil and water analysis).  A full itemized list and description of the pre-packed field kits can be found on the lab's website. 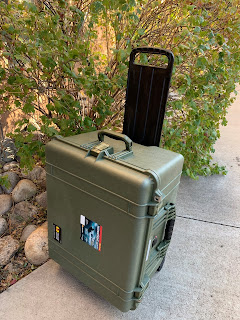 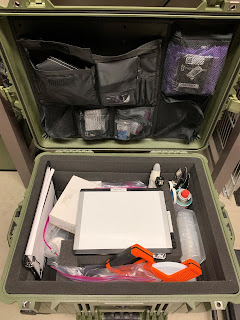 The Ecology BGC Lab has so much to offer students, community members, and local schools.  With highly specialized equipment and the opportunity to check some out for a project of your own, there's almost nothing this lab can't handle in regard to soil, water, and air.  Nonetheless, Ecology BGC col-LAB-orates with others in the Biodiversity Institute.  Teamwork makes the dream work, and a the entire group can be found online.

If you, or a scientist you know are looking to conduct a project of your own, the BGC lab may be a great place to start.  For contact information, check them out at http://www.uwyo.edu/ecologybgc/contact1.html
Posted by Wyoming EPSCoR at 2:03 PM No comments:

The Woman Behind the Lab Coat 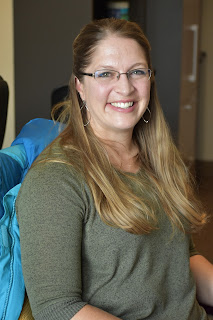 Jessica Kern.  The woman, the myth, the legend.  She is the wearer of many hats, but currently presides as a sitting member of the committee for the EPSCoR Microbial Ecology Collaborative and as the manager of UW's Ecology BGC lab.  Since entering these positions nearly a year ago, Jessica has made it her mission to expand lab use, designate funding to new, state-of-the-art lab equipment, and promote hands on learning across the many science-based disciplines at the university.  Her impact has been extraordinary, but how did she get here?

Jessica originally received her undergraduate degree in Animal and Veterinary Sciences before earning her M.A. in Zoology and Physiology from the University of Wyoming.  Entering the workforce, her first position was with the USDA Airborne Animal Disease Research Laboratory where she resided for nine years.  Following the USDA, Jessica found new excitement in working with amino acids and virus research as a lab technician.  Unfortunately, the company decided to move out of state to Kansas and Jessica's love for Wyoming was strong.  To remain in state, she took a position with the animal science department here on campus.  Jessica elaborates on her position with them saying, "I ran the growth and metabolism lab for the animal science department and we did a lot of research on cattle and sheep nutrition.  I'm still in touch with a lot of the undergrads that I worked with and the grad students."

With a clear passion for working with students, Jessica also wanted to explore the campus research side of science in more depth.  She did so by taking a position with the Wyoming Department of Agriculture.  She demonstrates excitement for the job saying, "That's where I really started doing more of the analytical chemistry.  I did some in the nutrition and metabolism lab, but I did a lot more there.  We worked with environmental samples there, too, so that was pretty cool."

Besides her resume being quite diverse, there are major areas of knowledge and passion that Jessica elaborated on during our time together.  She wants to be an advocate for human health and safety as well as animal safety.  Jessica really enjoys teaching and training people how to do things properly and safely.  She explains,


"I've learned so much over the years that if I can help somebody do it faster and more efficiently, I like to do that.  I'm very hands on running everyone's samples that they've collected.  I've run samples for everyone that's been a part of our project so far."


Jessica Kern is a wearer of many hats, but it's clear she has one solid passion for teaching and working with others.  This is especially true when it comes to the Ecology BGC lab and all who are involved in the research being completed there.  Her reach doesn't stop at the end of the science trail.  She is hopeful that more university students will begin visiting the lab that's located in the Berry Biodiversity Conservation Center.  For more information on what Jessica does or if you're interested on stopping in and saying hi, please feel free to reach out via the contact information below.

Email: jessj@uwyo.edu
Posted by Wyoming EPSCoR at 10:52 AM No comments:

On September 27, students from Central Wyoming College teamed with personnel from the University of Wyoming to conduct microbial research through soil testing in connection with the Eastern Shoshone Bison Restoration Project on the Wind River Indian Reservation.
The sampling is funded by EPSCoR, the Established Program to Stimulate Competitive Research, which fulfills the mandate of the National Science Foundation (NSF) to promote scientific progress nationwide.  The goals of Wyoming EPSCoR are to facilitate the building of research educational infrastructure, to increase the diversity of participants in STEM fields—science, technology, engineering and mathematics—and to administer awards to increase national research competitiveness.  EPSCoR also provides funding at CWC for the Interdisciplinary Climate Change Expedition (ICCE), which conducts cutting-edge research in environmental studies and archaeology on the Dinwoody Glacier, as well as independent research projects by students at the college’s Alpine Science Institute.
The microbial research project, using cutting-edge techniques including DNA sequencing and computational modeling, will help scientists learn the distribution and ecological consequences of microbes, a valuable approach to understanding the environmental effects of the reintroduction of bison in Fremont County.
Dr. Tarissa Spoonhunter, instructor of American Indian Studies at CWC, coordinated the activity, which began with a meeting of participants at the CWC Intertribal Education and Community Center. Dr. Brad Tyndall, CWC president, welcomed the group and applauded the success of the restoration program, followed by a presentation by Jason Baldes, representing the Eastern Shoshone tribe and the National Wildlife Federation, on the bison reintroduction effort, which aims to restore a herd of wild buffalo to reservation lands.  Historically, bison have had cultural, economic and spiritual significance to the tribe, and today about three dozen animals comprise the local population, on tribal lands east of Riverton.
The reintroduction of bison will affect the microbial composition of the soil, possibly leading to changes in the plant community on the site, perhaps the re-appearance of once-common indigenous species.  According to University of Wyoming EPSCoR, a $20 million grant from the NSF “will allow us to conduct microbial research at a scale that isn’t taking place anywhere else on the planet. Once we know what organisms are there, including their genetic capacity, we can figure out how we can make use of them”.
Upon arrival at the site, Baldes supervised a group of middle school students from Arapahoe in an activity designed to teach awareness of the project.  At the same time, CWC students were engaged in actual soil testing at bison wallows throughout the study area, using protocols developed by the University of Wyoming research team, which oversaw the effort.
Jacki Klancher, CWC professor of environmental science and health, and director of the Alpine Science Institute, commented, “This project is yet another example of the great partnership CWC enjoys with UW and EPSCoR.  It gives our students another valuable tool to use in their own research efforts, and we may well incorporate the techniques learned today in our ongoing studies of glacial change on Dinwoody Glacier.  In addition to the Interdisciplinary Climate Change Expedition, ASI students have been very active in other independent and collaborative scientific studies that have been supported by EPSCoR, and have presented the results of their research at symposia not only in Wyoming, but throughout the world.”
Posted by Wyoming EPSCoR at 11:03 AM No comments:

The semester is over, grades submitted, conferences attended and talks given. WyCEHG students are scattered across the globe, yet data must... 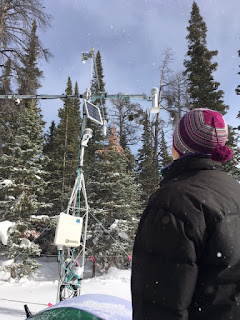 Any opinions, findings, and conclusions or recommendations expressed in this material are those of the author(s) and do not necessarily reflect the views of the National Science Foundation

Wyoming EPSCoR
Wyoming EPSCoR is one of about thirty EPSCoR jurisdictions. This blog is our way of telling our news and stories, sharing our research adventures and keeping our communities up to date on our current events. We hope that you will follow us as we begin our newest grant and continue on with our amazing outreach programs.